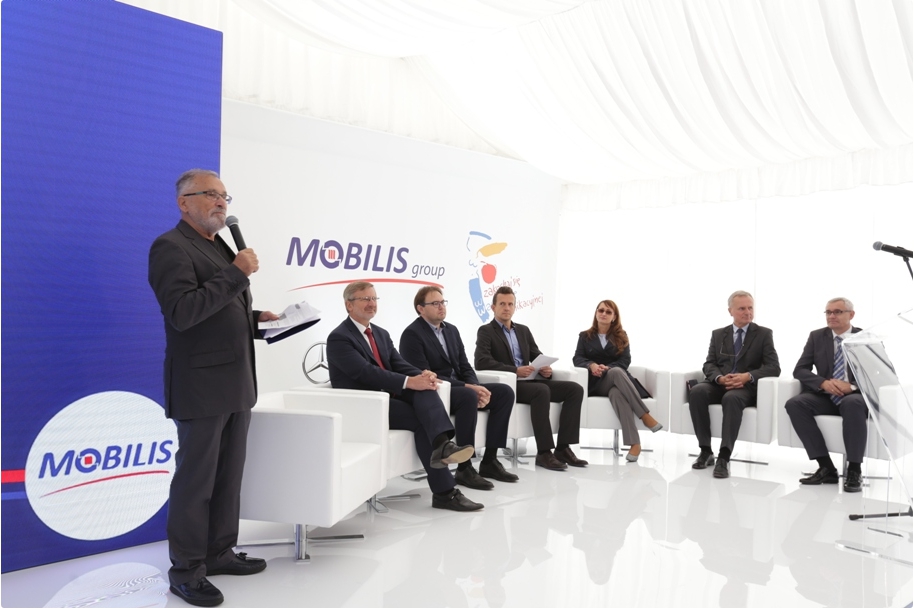 In accordance with the latest Warsaw Barometer, the record percentage of residents of our nation’s capital (as much as 89%) assesses functioning of public transport as good or very good. Such opinion is influenced first of all by the conviction of Warsaw residents about constant improvement in the quality of public transport in the city. On the occasion of the World Car Free Day, the Public Transport Authority (ZTM) and Mobilis, the biggest private carrier in the capital jointly promote bus transport and present its effectiveness.
In accordance with ZTM estimates, more than a billion passengers travel all public transport vehicles in Warsaw a year. In addition to two subway lines, trams, SKM transit, trains and city bikes, a well-developed bus system is also very popular among Warsaw residents. Taking into consideration performance (number of vehicle-kilometers), these vehicles have the greatest share in public transport in Warsaw (51 %). Thanks to systematic implementation of bus passes and opening of P+ R facilities, using of bus transport in Warsaw is safe, efficient and effective

The Warsaw Traffic Survey conducted in 2015 showed that on average 1.3 persons travel by one car on Warsaw streets. Two buses (9-meter and 18-meter long) can accommodate as many people as more than 140 cars that usually travel across Warsaw. Traveling by public transport is also a choice that is obviously more environmentally friendly. One car with an average number of 1.3 passengers emits about 140 g/km of carbon dioxide, whereas a new bus with diesel engine, which carries on average 80 people, emits 0.006 g/km of carbon monoxide per person. ZTM and representatives of Mobilis illustrated effectiveness and ecological aspect of public transport with an experiment involving a hundred drivers, who at the Połczyńska P +R left their cars and moved to two buses from the new Mobilis fleet.

Park and ride by public transport

"Experiences of many cities show that promotion of public transport contributes to reduction of traffic jams much better than construction of new roads or bridges. This idea is also implemented in Warsaw" – said Katarzyna Strzegowska, ZTM Deputy Director in Warsaw.

"An important part of the system of balanced and intelligent public transport is Park and Ride facilities. They are located primarily in the proximity of main transport hubs – at subway and railway stations. Drivers can drive to such parking lot, leave their car and continue their travel by public transport. In such a way, we can have a visible impact on reduction in the number of vehicles driving to downtown areas" – says Katarzyna Strzegowska.

Warsaw residents traveling by buses have become accustomed to increasing comfort of travel, which increases thanks to investments in the new fleet. Vehicles traveling on Warsaw streets are more advanced and have an increasing number of conveniences for passengers. The average age of buses that carry passengers in Warsaw was reduced from 10.8 years (2006) to 6.66 years (2015). In the end of July 2016, Warsaw streets welcomed a hundred of factory new, practically zero emission buses of Mobilis, the biggest independent public transport operator in the capital.

"On the occasion of the World Car Free Day, we want to jointly show that buses in the city are much more effective and environmentally friendly means of transport than passenger cars. Travel by bus is cheaper, safer and faster for passengers, and also allows to generate significant savings for the city calculated based on cost/benefit analysis, i.e. taking into consideration all cost drivers, starting from time spent in traffic jams, to costs related to environmental pollution – said Dariusz Załuska, General Manager of Mobilis Sp. z o.o.

"We are delighted that along with the new fleet we can offer to passengers very high comfort of travel. Buses from our latest fleet have a number of upgrades, including air conditioning, monitoring, ticket machines, LCD displays with passenger information, stop announcement system, and inscriptions in Braille alphabet. As we know, human aspect has always been an important part of providing transport service; therefore, we spare no efforts on making sure that our drivers are comprehensively trained, including in the scope of customer service" – says Dariusz Załuska.

Equipment in Warsaw buses has changed over the years. Since 2013, all vehicles have been accessible to wheelchair users and passengers carrying children in strollers. The first low-floor buses appeared on Warsaw streets in 1994. Today, it is a standard, which can be confirmed by the new Mercedes Conecto G.

"We are happy that Warsaw residents and visitors can travel by modern, comfortable and above all safe buses. Mercedes-Benz buses are an optimal solution for passengers, including those with limited mobility, drivers and operator. In addition, these vehicles have an innovative recuperative module, which significantly reduces fuel consumption and thus emissions and environmental burden" – highlights Antonio Cavotta, General Manager of EvoBus Polska.

The key role is also played by efficient monitoring system, which considerably improves the level of safety in vehicles. This condition is met already by three quarters of buses (72.14%) traveling on Warsaw streets.

"In Solaris Alpino vehicles, monitoring system comprises as many as 7 cameras, which record image from both passenger space and driver’s cab. They monitor everything what happens in front of the bus, behind it and on the side. What’s important, these vehicles meet the most stringent exhaust emission standards. Therefore, they are very environmentally friendly and contribute significantly to improvement of quality of life in our cities" – explains Krzysztof Musiał, Regional Sales Director in Solaris Bus & Coach.

"In the scope of passenger information systems, we have taken a giant leap forward in terms of quality. We remember the times when buses traveled with information on run and route number written on common boards. We started production of the first electronic information displays about 27 years ago. We have accessorized 108 brand new Mobilis buses, which now travel on the streets of Warsaw, with the latest solutions" – says Anetta Knitter, General Manager of Zakład Elektroniczny SiMS, which supplies dynamic passenger information systems.

A little bit of history – Ikarus and Jelcz "cucumber" bus

Until 1978, Warsaw public transport was based on the popular “cucumber” buses made by Jelcz that achieved a kind of cult status. Their successor and the longest operated vehicle in the capital was the symbolical Ikarus 280 bus, which was removed from service in 2013. A major increase in terms of routes and number of vehicles was reported in night bus service. Over twenty years, the length of night bus routes was increased more than 2.5 times, from 319.1 km in 1995 to 833.8 km in October 2015. The number of buses designated for operation of night service increased from 57 in 1995 to 99 in 2015.

InfoBus.pl
ZTM Warszawa and Mobilis on effectiveness of transport